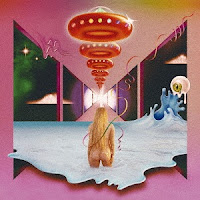 I can't think of a single Rainbow pun

You can blame my wife for this one.  I had precisely zero interest in Kesha whatsoever when she debuted, and that's pretty much where she stayed for me, just a footnote in the back of my mind; the dumb pop star with confusingly terrible lyrics about hooking up with Mick Jagger lookalikes and asking where dicks are located.  I've got no beef with pop music on principle (I've mentioned before how great Madonna was at her peak), but Kesha wasn't my bag, and if I didn't marry somebody who kept up with Top 40 stuff I never would have known a damn thing about her career.

But here I am now, deep in Non-Metal Month, tackling the most recent Kesha album, and I've got some words to say about it.  It's probably mandatory that you know the backstory of what happened behind the scenes leading up to this album in order for it to really make any sense, so bear with me while I give a quick rundown of a sensitive subject.  Basically Kesha's contract stated that she was tied to a producer who went by Dr. Luke, and she had to work with him for all of her releases (she was signed to his label, Kemosabe, which is owned by Sony).  He was the man behind the knobs, so to speak.  Basically, the short version is that Dr. Luke spent years and years abusing the shit out of her mentally, emotionally, and physically.  She finally snapped and entered a lengthy court case to get out of her contract and produced a veritable Magna Carta of grievances, from shaming her about her weight to straight up rape allegations.  I'm inclined to take her side of the story since I can't imagine anybody would put their career on hold right at the peak of it just to manufacture lies about a dude who helped her reach such success.  Occam's Razor tells me the dude really is just a massive piece of shit and she was willing to take the risk of sabotaging her career to get the fuck away from him.  Of course, because we live in Hellworld, she was basically told to shut up and quit complaining at every turn of the legal proceedings and eventually was left with no real choice but to bite her lip and go back into the studio (though thankfully she was allowed to work with different producers this time, which ultimately was her goal, despite the legal losses).  Enter Rainbow in 2017.

So with that ominous dark cloud over her life, an album with imagery as bright and optimistic as a rainbow seems kind of odd, but it quickly comes together.  The album opens with "Bastards", which is a quiet acoustic song all about holding your head high when people are trying to bring you down.  "Bring you down" seems like a really quaint way of describing "yelling at you for being upset about being raped" but hey, she can only go so far I assume.  It's not a particularly memorable song on its own, but lyrically you can really feel where she's coming from.  There's a feeling of malaise over the whole thing, like she's trying her absolute best to be strong in the face of unrelenting floods of horseshit but it's really hard to do that when half of the country thinks you're being a spoiled brat because you came forward with rape allegations after the statute of limitations passed so tough shit.  It's a spot I can't even imagine myself being in, so it's pretty courageous to open her new album, in the midst of all this fuckery, with a very bare and underproduced song featuring basically nothing except a guitar and her voice.  It's striking, and I like it, even if the song itself is nothing to write home about.

But the second track, "Let 'em Talk", is where she brings the house down.  This is where the Rainbow comes in.  After a few chords from guests The Eagles of Death Metal (who, frankly, I've never liked, but they work really well here), she just breaks loose and starts sounding like somebody who is having fun for the first time in years.  "Let 'em Talk" is upbeat pop rock in one of the most grin-inducingly infectious strands imaginable.  It's a very fun song, and she lets loose in a way that feels cathartic even for me, a listener of of things that celebrate nihilistic apocalypticism with regularity.  This is what it sounds like when somebody truly moves on from overwhelming toxicity and breathes fresh air again.  The negativity is in the past, and now we're finally free to be ourselves again, and fuck everybody from back then who wants to see us fail, we're not going to.  Don't let those losers take your magic, baby.  Honestly, this is one of my favorite songs of all of 2017, it's just an incredibly fun romp, and an ode to living your life the way you want to without anybody chaining you down.  The following "Woman" is in the same vein, being almost insultingly catchy and featuring some gloriously funky horns helping the song maintain an excellent bouncy groove.  This is the kind of pop I like a lot.  I, like most metal fans, got into Lady Gaga around the Fame Monster era, but unlike most metalheads it wasn't because I thought she was some deep and subversive ubergenius upending music as we know it.  I just like big dumb hooks, and Lady Gaga was a fucking master at big dumb hooks (mostly because she spent a lot of time ripping off Madonna, and if you can remember a few paragraphs ago, I fuckin' love Madonna).  Kesha here shows me that she can also kick total ass at big dumb hooks, and "Let 'em Talk" and "Woman" is a one-two punch that showcases this natural talent of hers with aplomb.  The album hits a downbeat afterwards with "Hymn", but it works well enough, giving a vibe akin to getting baked and cruising a desert road while you contemplate what the universe is.  It's still very much a "live life your own way" type song despite lacking the upbeat skippiness of the previous two bangers.

Most readers of mine should know that I hate track-by-track style reviews, so it should be kinda weird that I'm taking that approach here.  Really, I'm doing it because I needed to lead you in to the album's fifth track and lead single, "Praying".  "Praying" is both the clear highlight of the album and simultaneously the biggest problem.  Really, this is one fuckin' powerful song.  All of the frustration and bitterness of the legal battle is on display here, but at the same time it's really subdued, just bubbling under the surface while she delivers a message of forgiveness.  However, it's forgiveness with a caveat.  She hopes Luke is doing okay, and by "doing okay" she hopes he's burning alive.  The line about "I hope your soul is changing" sounds rather innocuous at first, but when you think about it medium-hard you realize she's saying that she hopes he becomes a completely different person because that's truly the only way he can ever atone.  Once again, "catharsis" seems to be a theme of the album, and "Praying" showcases it as well.  This is an emotional release, a deep seated purging of negativity akin to a fucking cleansing fire.  The release at the end of the bridge where she just belts out a piercing falsetto is spine tingling in how powerful it is.  Honestly it's a pretty hard song to listen to considering all that went down prior to writing, it's a very open and honest piano ballad with a surging choir, and when it's all over you feel almost winded.  Like holy shit how did I make it through that? I always differentiate between "favorites" and "bests", and "Let 'em Talk" may be my favorite song on Rainbow, but "Praying" is undoubtedly the best one.

The problem is that... well shit now what?  "Praying" is very clearly the emotional climax of the album, it's the unquestionable peak.  The problem is that there's like nine tracks left but nowhere to go.  The rest of the album is almost entirely filler and it's pretty blatant about it.  I can commend Kesha for the wide variety of styles on display, from country ("Hunt You Down" and a cover of "Old Flames Can't Hold a Candle to You", featuring Dolly Parton herself), more upbeat pop rock ("Boogie Feet"), and the weird creepy vibe of "Boots", but almost everything else is a frankly weak ballad.  Everything was going to sound weak with the monumental shadow of "Praying" looming over them all, but even the best ones in a vacuum are just kinda eh.  "Learn to Let Go" is probably the best of the post-"Praying" tracks but it still doesn't really do much to excite me.  And I can't even fathom why a goofy little joke song like "Godzilla" wound up on here when the rest of the album is so personal and liberating.  I don't have much to say about the rest of these songs because they're just kinda symptomatic of pop music in general.  Frontload the album with all the best songs and then pad out the runtime with obvious leftovers.  I hate to compare it to this since this album is also bloated with filler but Lady Gaga's Born this Way got it right by putting "Edge of Glory" at the end.  That's the obvious climax of that album and it places it exactly where it needs to be instead of slapping it in the traditional lead single slot and leaving the rest of the album to act as a 30 minute denouement.

So yeah, overall Rainbow has a lot of potential but it's seriously flawed.  There's an incredible five track EP in here with the first five tracks but the rest of it just feels like B-Sides thrown in to round out the runtime.  However, I do still like it overall based on the strength of those openings tracks.  Everything I ever hoped Kesha to be is on display in those tracks, ever since I learned that trashy crap like "Tik Tok" was supplanted with much better (though more traditional) pop songs like "Die Young".  I knew she had tracks like "Let 'em Talk" and "Praying" in her, and I'm glad to see them come to fruition.

Email ThisBlogThis!Share to TwitterShare to FacebookShare to Pinterest
Labels: Pop