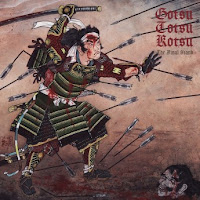 I wish I could quit this band.  It's almost unfair how unfathomably good they are with such consistency.  After debuting with the stellar Mouryou in 2009, and then taking their sweet time to release a followup, they've since released four albums in the ensuing five years, each one somehow its own shade of total brilliance despite all of them being fundamentally identical.  All of them contain the same ingredients.  Every time you hit play, you know you're going to be hit with a barrage of blazing fast slap bass, thunderous roaring vocals, riffs so fast you'll swear they're smoking crank, solos that sound like Keiichi grafted three extra fingers and a tentacle to his left hand, and drumming that is, comparatively, much more simple than the other two instruments but still pounds out on warp speed.  Despite that, there are subtle differences with each one.  Legend of Shadow is very long and organic, while Retributive Justice goes straight for the throat with unabashed ferocity, for example.

So what's the approach that The Final Stand takes?  The best way I can sum it up is not with words, but with the mental image of being Fus Ro Dah'd off a cliff and landing in a pit of machineguns.  Most Japanese metal bands seem to operate on the idea that "more is more", and Gotsu Totsu Kotsu is no exception.  The Final Stand here is pure fucking excess in the most gorgeously brutal way imaginable.  There is more eyeball-melting slap bass delivered at Mach 9 here than ever before.  The riffs are some of the fastest and most devastatingly brutal they've ever written.  The drumming leans a bit more towards the simplistic with a bit less double bass and blasting than before, but it's still there, and even at its slowest it sounds like a school bus full of sledgehammers crashing into a church.  Ever since the lineup shift that saw Keiichi and Kouki enter the fold back in 2015, GTK has been a fucking machine running at full capacity, oiled with the blood of a million fanatics.

I can't even think to describe The Final Stand in musical terms.  It's like getting slapped with a bundle of stop signs.  It's like getting your skull split with an iridescent battleaxe covered in hot sauce.  It's like trying to finish eating a bear before it wakes up.  It's like that scene in Ong Bak when Tony Jaa lights his feet on fire and spinkicks a hapless goon into a trash can.  The whole damn thing, from start to finish, is just a downhill sprint of pummeling death metal performed with stylish flair and bloodthirsty zealotry.  Even the moments where the band slows down and isn't trying to murder you with soundwaves like the intro to "Haisui no Jin" or the outro of "Muni no Kessen" are awe inspiring in how heavy and/or epic they are.  No three piece band has any right to sound this massive.

I think that's what makes this album, and by extension the band as a whole, so impressive to me.  They defy physics in the sense that they are so gargantuan, with such a huge, full sound and such oppressively crushing heaviness, and yet they zip around with astounding celerity, like a twelve story fox with bazookas for feet.  Listen to the fucking bass runs in "Nadegiri", how is that even achievable by humans?  I'm so focused on the speed and manual dexterity coupled with the colossal girth of the sound that I haven't even really touched on how epic everything is.  I mean it, everything sounds somehow greater than itself, as if each song is being played by malevolent celestials themselves yeah I went there I said it sounds like gods are playing these songs.

I'm repeating myself.  This is just so, so good y'all.  I can hardly wrap my head around how they managed to create near perfection for like the third god damn time in five years.  I still feel like I'm selling them short.  I have yet to hear death metal that really sounds like this, and their little quirks like the iconic vocals and multiverse-upending slap bass just make them stand out even more.  Gotsu Totsu Kotsu is one of the greatest metal bands to have ever taken shape in the modern era, and I really don't see how that could change in the foreseeable future.