10 YEAR REUNION: Sinergy - Suicide by My Side 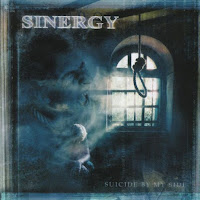 It's well known that early Children of Bodom was more or less just insanely shreddy power metal with harsh vocals since Alexi Laiho's vocal talent in inversely proportional to his guitar skills, and so there was always a hypothetical "what if?" scenario floating around with regards to how they'd sound if he had just actually hired a real singer and embraced the flower power present on Hatebreeder.  The closest we're probably ever going to get is Sinergy, the band he had started in the late 90s with his then-girlfriend/wife Kimberly Goss.  And while Sinergy isn't a perfect representation of what that hypothetical Power Bodom would've sounded like (there are no keyboards and the tempo tends to be a bit more reasonably human), it's still an inescapable point of comparison.

I'm being a bit facetious here, because while Laiho is the obvious "superstar" here who has arguably gone on to have the most success (it's somewhat of a supergroup so Marco Heitala is here too), the true brains, heart, soul, and star of the band is Goss.  She was the chief lyricist and songwriter, front and center at all times, and commanded the absolute fuck out of these guys with her brazen, combustive voice.  Suicide by My Side is their best and most well known album, and while it has a lot of flaws, her voice in particular is not one of them.  She's the obvious highlight, with a very Doro-esque approach to her mad aggressive bellowing.  That's not to say she can't be sweet and emotive when the song calls for it, but her strength very clearly lies behind her explosive lungpower.  The album opens with "I Spit on Your Grave", which wastes precisely zero seconds before careening into a whirlwind of excitement with her forceful mania pushed to the forefront.  When Suicide by My Side is going full throttle like this song, it's at its best.  The title track is the other clear highlight, with Laiho's signature guitar theatrics leading a frantic rhythm section through an adrenaline fueled romp, all with Goss's sublime power carrying everything even further.

The reason that this album has soured so much for me over the years is that, unfortunately, for how great the opener and closer are, the handful of problems the album has are all pretty unavoidable and all tie back to the same root cause: this album, frankly, does not sound like it was written by adults.

What I mean by that is that it's just super amateurish on all fronts.  As amazing of a vocalist that Goss is, lyrics are really not her forte.  The two main themes that constantly pop up are those of empowerment/revenge and despair/suicide.  It's bad enough that those two ideas are diametrically opposed to one another and give the album a serious case of tonal schizophrenia, but even beyond that they just sound like they were written by a 14 year old.  The theme of suicide is constantly presented through a filter less like a desperate soul who can't push on anymore and more like an insincere cry for attention.  There are references to "not being noticed" in a few places, which is just the most teenage reason to want to end it all that I can think of.  There's a short snippet that prefaces the music video for the title track where Goss sits around playfully talking about how suicide isn't a big deal and she would love to try it again, and it comes off as so damn phony that it really taints the whole experience.  As somebody who has been there and still struggles from time to time, it's not that it offends me per se, it just feels like she doesn't get it, and is instead toying with these ideas as some sort of ill-conceived marketing plan to appeal to early adolescents who bought Cradle of Filth shirts at Hot Topic en masse around this time in history.  I don't normally focus on lyrics, but they're really shit here.  The whole album is loaded with really shallow, basic lyrics about two ideas that don't coalesce in any way and feel like a first draft.

Musically the album sort of falls into the same pitfall of sounding like a first draft presented as a final product.  There are awesome moments here and there, "I Spit on Your Grave" and the title track sound like lost Follow the Reaper tracks with a massive boost vocally (worth noting that those are the only two tracks credited solely to Goss and Laiho), "Me, Myself, My Enemy" has a great chorus, and even though "Written in Stone" is probably the most egregious offender in terms of lyrical deficiency, the total simplicity of the riffs work on that one, since an "Unforgiven" style ballad doesn't need any real theatrics.  Everything else?  Nah, it sounds like the rest of the band wasn't even trying.  Goss kills it throughout but riffs as brain dead basic as "The Sin Trade", "Passage to the Fourth World" and "Nowhere for No One" sound like warmup exercises more than a finished product.  There is so much instrumental talent in the band, it stuns me that the best they could come up with to showcase their skill is shit like this.  It's baby's first heavy/power metal in a lot of instances, and the few truly phenomenal songs are so damn frustrating because obviously they can do better than that lame ass main riff on "The Sin Trade".

Despite the startling amount of filler and the awkward lyrics, I'd actually still recommend giving this a spin if you get the chance.  I'm not 17 anymore so I may not identify with how shallow and basic the album is at its core anymore, but tracks like "Suicide by My Side" and "I Spit on Your Grave" are still certified bangers, and the more explosive and exciting tracks are more than worthwhile for fans of the style.  Suicide by My Side is a very hit or miss album, but the hits are so strong that I still listen to this even fifteen years after first hearing it.  It's concise and punchy, and while it doesn't always make its point effectively, when it is effective, it's just as strong as anything else to be found in the genre.

Before writing this review, I did some googling to see what Kimberly Goss has been up to lately since she's been more or less absent from the metal scene ever since this album way back in 2002.  I found an interview she did with Noisecreep back in 2012 where she revealed that she's been happily living a quiet life as a mother, working at a music school.  Here's the thing though, that particular music school just so happens to be like a twenty minute drive from where I live.  This means I now have a plan for what to do in my spare time.

1) See if she still works there.
2) Throw pies at her until she agrees to reform Sinergy.