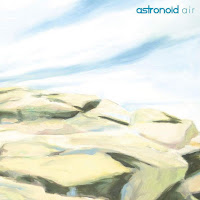 Just look at this bullshit.  Look at that fucking watercolor album art, look at that wussy title, look at the band photo.  A bunch of pencil-necked coastal hipsters with big beards, suspenders, square glasses and plain-ass striped shirts?  I bet every last one of these losers owns a fixie and at least one Radiohead vinyl.  How dare they try to co-opt metal while peddling this weak dreampop hipster bullshit!  I bet they tour with Arcade Fire.  This is the same shit that made Deafheaven so insulting!

Well, if y'all remember, I actually like Deafheaven's endlessly controversial Sunbather, and in turn, I also like Astronoid's debut, Air.

I'm not going to sit here and pretend that these dudes have anything even remotely approaching metal cred.  Air is almost exactly as light as the title implies, focusing on waify, floaty soundscapes akin to what Devin Townsend puts out at his lightest, with seemingly random blastbeats and zippy guitar lines underneath.  Take a listen to something like "Up and Atom" or "Resin", this is cut from pretty much exactly the same cloth as Sunbather, albeit assembled in a much more coherent and less segmented way.  Despite the blasting and tremolo lines, it's all used to an effect closer to a sailboating excursion than anything menacing.  There's no sense of danger here, there's nothing unhinged or scary present.  Brett Boland's vocals are probably the most saccharine and least threatening thing I've ever heard in the context of a metal album before.  They have negative grit, just floating pleasantly above the music in a very dreamlike atmosphere.  They're often labeled as "emo", but I know emo gets misused just as often as "techno" does so I'm not going to exactly go that route, but there's no denying that they're very emotive and pleasant.  You can easily argue that they have no place in this overarching genre, but I think they work well for what Astronoid is doing.

What makes this album fascinating to me is that it seems just sort of backwards in everything it does.  It's aesthetically the complete opposite of black metal, despite utilizing so many of the genres tropes.  It's pretty obvious that the band didn't form until after Alcest and Deafheaven and the like rose to prominence.  You could argue that this is just a continuation of what Lantlos and Fen were doing in the early 2010s, but I'm more willing to point the finger at the hipstery "we play metal but don't actually like metal" bands of the Pitchfork ilk.  Their inspiration for the (admittedly constant) heavy parts clearly come from the least metal metal bands to ever play metal.  It's more Amesoeurs than Darkthrone, is what I'm saying.  Even one of the most basic workaday models for this style of metal comes from the idea of basing the sound on calming swells of post rock melodic climaxes with a backdrop of the occasional minor key tremolo riffs and blastbeats, but they even seem to do that backwards.  Astronoid is based instead on those metal elements, with the busy percussion and surprisingly dexterous guitar lines forming the true meat of the album, with the dreamy pop vocals and flittery melodies coming in second, mere peripherals to the frantic rhythm section.  It's all very fast, but it's completely devoid of aggression, instead coming off as pure desperation.  Just like Harakiri for the Sky, it's both fast and slow at the same time and spends a refreshing amount of effort on making the riffs themselves just as interesting as the melodies.

As I'm writing this, I have my balcony door open (which is right next to my computer), and it's currently storming like a motherfucker.  Rain is billowing sideways, wind is howling, heavy and humid atmosphere is being intermittently broken up by sharp, cool blasts of air, there's very distant thunder rumbling and the occasional flash of lightning, and this is all, honestly, a very fitting backdrop for Air.  With a title as wispy as fucking Air coupled with such a bright, lively, and serene album cover, you figure this would be a good match for a pleasant summer afternoon.  But no, there's something about this cacophony occurring mere feet from where I currently sit in safety that compliments the album very well.  It meshes with the earthy forces of nature outside in a weirdly pleasant yet discordant way.  The music itself isn't malicious or destructive in any way, but it doesn't ignore the vaguely chaotic underpinning of nature itself.  The rain is crashing down in sheets but no trees are blowing over, and this album is similar in that regard, it's soothing with its veneer of welcoming safety, and the ill-fitting fast metal underneath the dreamy soundscapes hits me the same way a rainstorm hits me.

I've said a hundred times before that most Pitchfork-approved metal bands suck shit, but I'm learning that it's mostly the doomy stuff I hate.  When that bastion of snooty baristas latches onto something that melds dreamy chillwave atmosphere with some semblance of "black" metal (this is the first time I've ever been uncomfortable using the term, there really ought to be a different descriptor for something this wholly lacking in vitriol), I... kinda really dig it.  At its core, Air is a metal album written by indie kids who don't actually know anything about metal (total speculation on my part, but I feel like you'd never write a song like "Tin Foil Hats" or "Homesick" if you were worshipping at the altar of Beherit), and in doing so they wound up crafting a surprisingly well made experiment in clashing sounds.  If I had any credibility as a metal critic before today, it's now pretty much entirely shattered.  And I'm okay with that, I'd rather embrace something like Astronoid than pretend I hate it simply because it's fundamentally un-headbangable.