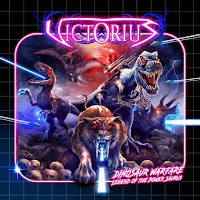 When I was seven years old, a friend and I decided that we wanted to make comic books.  The combined brainpower of two elementary school boys fueled by Mountain Dew and raised on Sega and Saturday morning cartoons came up with the idea of a crack squad of cybernetic dinosaur mercenaries, a creative midpoint between X-Men and Dinosaurs for Hire.  Neither of us could draw, we didn't have any colored pencils so it was just pencil outlines of squiggly vaguely dinosaur-with-machine-gun shaped blobs fighting each other.  We christened our creation "DINOSAUR EXPLOSIONS".  We made maybe two "issues" of this storyline before our sugar rush wore off and we fucked off back to playing Clay Fighter or Road Rash or whatever the hell it is that seven year olds do, but our foray into comic books always stuck with me.

If you need context why I love Victorius's new EP so god damned much, Dinosaur Warfare - Legend of the Power Saurus, it's entirely because I thought of this idea already twenty years ago and nothing thrills me more than seeing it come to life.

Victorius has been kicking around for neary fifteen years now, releasing four full lengths that have languished in moderate obscurity (though not totally unknown, they all have a handful of reviews on MA with good scores), but nothing about them has ever really been superlative.  They're a solid second-tier power metal band from a region that is overflowing with solid-yet-forgettable power metal, there's never really been a reason to seek them out prior to this release.  They needed to do something to finally stand out, and by golly did they do that.  Not only did they land on the idea of the most outwardly absurd concept album in recent memory (an epic sci-fi struggle between cybernetic dinosaurs fighting against hostile alien invaders), but they also managed to finally accompany this brazenly dorky idea with the best music they've written to date.  Seriously, the chorus of "Legend of the Power Saurus" is like the part in the painting when God's finger touches Adam's.

The EP starts off decently enough with the semi-title track, "Dinosaur Warfare", sonically landing somewhere between the raw energy of Gamma Ray and the over-the-top silliness of Sonic Firestorm era Dragonforce (with notably less explosive guitar theatrics, of course).  It's a good, fun track that sits fairly well in line with what I remember of their previous work.  Solid power metal but nothing particularly superlative.  It isn't until the next track that the record reveals its true genius.  The three track stretch of "Legend of the Power Saurus", "Lazer Tooth Tiger", and "Razorblade Raptor" are three of the most ludicrously fun power metal songs in the last handful of years.  Something here just clicked with the guys, because all three are rabidly infectious tunes that mix massive, soaring melodies with some serious rough-and-tumble ferocity in the rhythm section.  The opening riff of "Lazer Tooth Tiger" is so fucking vicious that I can barely describe it, and it blends so well with the comparatively light chorus that just flies over the metaphorical battlefield with style and grace.  You'd be amazed, but there's an astounding amount of class and dead-eyed seriousness with the care given to these songs.  Despite the childish lunacy of the deep voiced pre-solo call to battle of "IT'S MORPHIN' TIME!" in "Legend of the Power Saurus" and the sheer ridiculousness of a song about a character named motherfucking Razorblade Raptor, there's no indication that the band took the task of writing these tracks as a joke.  Lyrical absurdity aside, these tracks all sound like lost Gamma Ray recordings that  hypothetically existed somewhere between Power Plant and No World Order!, and any power metal fan worth their salt should know how much ass Gamma Ray kicked during that time period.  It's meat and potatoes power metal devoid of flittery synths and booming orchestral patches.  It's built entirely on riffs and vocals and that's all it needs to be.  It's so fucking silly to say out loud, but a chorus that ends with a triumphant, booming tenor shouting "MIGHTY LEEEEGEEEEND OOOOF THEEE DIIIIIINOSAaAaAUuUuUR" is actually the benchmark for great choruses this year.  This is the mark that all power metal bands need to push themselves to surpass in 2018.  It would literally be amazing if I was kidding.

However, there is a bit of a mammoth in the room, that being the closing track, "Flames of Armageddon".  It's more on par with the opening track in terms of quality, but for some reason it's a thematic break from the rest of the album, being instead about some generic apocalypse story invoking traditional ideas of saints and sinners.  Man I hate to be that neckbearded fuck to say this, but come on man give us more dinosaur shit!  How can you give us such a brilliantly stupid premise and then neglect to give it any closure?!  I feel like I just got the rug pulled out from under me, we were robbed of more goofy awesomeness.  Where's my track about Terrordactyl?  Triflareatops?  Assault Archeopteryx??  If nothing else, "Flames of Armageddon" does at least uncover an uncomfortable truth about Dinosaur Warfare, that being that the lyrical absurdity may truly be the thing that makes it as awe inspiring as it is.  I don't want to admit it, I don't want to stan for a dumbass gimmick but I feel like it can't be solely coincidence that the only track that breaks from the gimmick is a disappointing track, despite it being musically every bit as good as the preceding ones.

But then again, maybe it's a good thing that we really only got four songs about this concept.  If Kung Fury has taught me anything, it's that reaching for the most intentionally absurd gags really runs out of steam quickly, as that movie stopped being funny less than halfway through and it's only a half hour long.  So I'm not going to look a gift horse in the mouth, Dinosaur Warfare is one of the most fun, tight, and well crafted collection of riffy power metal songs with stellar choruses assembled in the last while.  It's so bizarre to say, but it's totally true.  Perhaps it's because of the brazenly stupid gimmick, perhaps it's in spite of it, but regardless of the reason, this is one of the best power metal EPs you're going to hear in 2018, and that's not a joke.  DINOSAUR EXPLOSIONS lives on forever.

We are soldiers of the buuuurning sun!
With fire in our song!
Mighty leeegeeend oooof the diiiiinosaaaauuuur!

Posted by Bastardhead at 7:27 PM