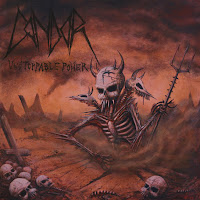 Thrash's not dead??  Nah, it's still more or less a creative dead end in terms of innovation potential, but that just means that the great bands stand out purely for being really fucking good at thrashing.  Condor definitely shows themselves worthy of hype in the Dead Riff Era, because Unstoppable Power is a venom fueled blast of blackened thrash insanity.  I still seem to prefer Power Trip at this juncture, but Condor is ridiculously fucking close behind.  It's especially cool because, like I said, there's nothing inherently mega-creative about the band, it's just Aura Noir styled hyperthrash with smatterings of black metal misanthropy and grit.  It's the exact kind of thing that Witchaven was all about nearly a decade ago that I couldn't stop masturbating over.  The album tends to fluctuate between the balls out black metal-infused tremolo salvos and more traditional bay area thrashing cranked up to 11.  Compare the bestial hunger in "Embraced By the Evil" to the more focused riff assault of "You Can't Stop the Fire".  The stylistic differences between the tracks on Unstoppable Power are almost imperceptibly subtle, but they're there, and it's good to note that the band is quite skilled at handling all of them.  I think the main reason this stands out so much to me despite thrash as a whole being so fucking dull and played out nowadays is because of something very simple that a lot of bands had mastered in the 80s and most of the copycats completely screwed up in the 00s, and that's the balance between intensity and hooks.  Calling Condor "melodic" in any sense of the word is misleading, because this is all about furious blasting helldeath from the get-go, but there's a very 80s sense of riff writing here, because like the earliest outings of Exodus and Sodom, there is a marvelous sense of infectiousness intertwined with nuts-first freneticism in the riffage.  Check out something like "Chained Victims" or "83 Days of Radiation" for an audible example of what I'm talking about, it's excellent stuff.  When Nocturnal Breed crawled out of their hole a few years ago and finally followed up the excellent Fields of Rot, this is the album I was hoping to hear instead of the thoroughly forgettable Napalm Nights.  Norway may be known for black metal, but Condor definitely shows that those frozen buttcicles know how to thrash just as well.  Like Ripper was the underground foil to the mainstream darling Vektor in 2016, Condor is to Power Trip in 2017.