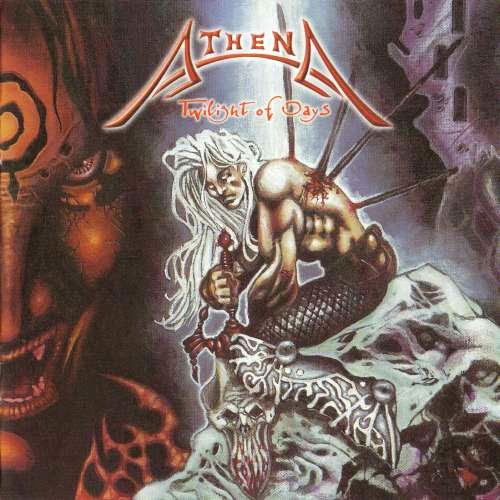 I'm gonna give it to you straight, like a pear cider made with 100% pears, Twilight of Days is really a terrible album.  There is so much wrong here.  The riffs are completely unengaging, the vocals are weak and mousey, the keys sound like a Fisher Price toy, and the production as a whole is flat and plasticky.  So many issues of this nature swirl into this sugary goop in the middle of a standard power metal album that has wallowed in obscurity for the better part of 14 years for damn good reason.  In a just world, that would be all the review I bother to write.

Unfortunately for all of you, this isn't a just world, and instead it is a world where my taste stands in defiance of all common decency.  And with that I declare, Twilight of Days absolutely fucking rules despite the myriad of problems it carries.  If anything, this album is one of the greatest testaments to substance over style and the importance of good songwriting in the history of power metal, and it's tragically overlooked by so many other bands who try to stand out via bloated twenty two minute snorefests and fifty layers of dueling banjos.  No, fuck that, Athena take a very traditional approach to power metal, and write songs so god damned tight and warm that they might as well be your mom.

I'm often criticized for generally sticking to more popular bands when it comes to metal.  You'll catch me bumping Blind Guardian a dozen times before I spin a Perpetual Fire album, so it's really sort of odd that this random obscurity from Italy honestly ranks amongst my favorites in power metal.  Really, the songwriting is so infectious and well done that I can honestly put Twilight of Days in the same company as Gambling with the Devil, Somewhere Out in Space, Evolution Purgatory, and many others of that ilk.  Granted, none of those albums really sound all that much alike (I just find this to be of similar overall quality), and Athena keeps in line with that by not really adhering to the over the top bombast of Rhapsody, nor the down to earth riff onslaught of Persuader.  I've seen them tagged as "progressive power metal", which I personally don't buy.  Really all that seems to mean is that they have a penchant for very low, heavy chugging riffs akin to Morgana Lefay, not long, flowing song structures and complex melodies like early Symphony X.  So if you've been able to sift through all the names I dropped there, the point is that Athena play a rhythmic style of power metal with a huge emphasis on vocal hooks and melodies, with speed, bombast, and flashy soloing taking a very distant back seat.

But BH! In the opening fake out you called the vocals weak and the riffs boring, how can you praise the album if it has those problems when you say that's what the songs are based off of?  Doesn't that mean the entire idea of the album is broken?

Not quite, this is an example of sheer charisma and character overpowering very obvious technical flaws.  Power metal was never an especially riff-centric style of metal in the first place, so the fact that the songs need to rest on the power of the hooks doesn't bother me much, nor should it you.  Tracks like "Falling Ghosts", "Hymn", and "Touch My Heart" all showcase what I'm talking about.  They're some of the lighter songs on the album, and they take poppy hooks and slather them liberally over admittedly mundane riffage.  Songs like "Lord of Evil" and "Til the End" take a darker approach, but still the sugary smiles can't stay away forever.  A huge amount of the album is highlighted with elements that mask the band's flaws.  Who cares that the riffs are boring when the hooks are so good?  Who cares that the production is ass when the choruses are so catchy?  Twilight of Days is an album that knows what it's good at, and thus focuses on precisely those elements.

I also said the vocalist was mousey, and that's really the best word for him.  Really, he sounds like his head is the size of a grapefruit.  It's high pitched almost to a fault and really just sounds like it's an adorable guardian of Redwall instead of a leather clad manchild like all PM singers actually are.  But despite this, there's a lot of confidence in this tiny voice, and he manages to have an almost indescribably booming grit to his squinting alto.  It's a paradox I still can't adequately explain, but I love it.  He takes center stage over every instrument barring maybe the keys during one of their several solos, and he just owns every moment of the spotlight.  Listen to the out-chorus of "Falling Ghosts" and tell me that this little four foot tall dork with a bad mustache doesn't have his feet planted in a power stance and his fist clenched tightly and outstretched towards his bedroom wall when he nails that balls out falsetto wail at the end.

Really the only bad thing I can say about the album that can't be covered up by its strengths being just that damn strong is that the ballad near the end, "End of my Life", is total ass.  But then again the only power metal band in history who could ever write a ballad worth a shit has been Blind Guardian, so no logical person was going to go into that song expecting it to be any good anyway, so even that is easily overlooked.  Twilight of Days is a strong effort from a band with very notable flaws that should really hinder the music to the point of worthlessness, but the intangibles at play are just so fucking inspiring and entertaining that I can't help but fall in love anyway.

Basically this album is Tim Tebow, but I don't hate it.