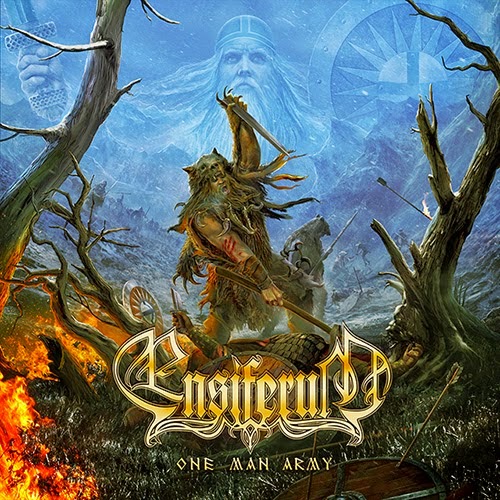 Ensiferum's career trajectory could be described as "wonky" or "inconsistent", but that's odd if you consider the fact that the personal ratings I've given every album increase until Victory Songs reaches the pinnacle and the following two albums score consecutively lower.  I mean, that seems pretty clear cut to me, no?  They started off inconsistent with a penchant for boring filler dullards, got more and more epic, focused, and energetic, and then got slightly experimental before just giving up and making a full album of those boring filler tracks from the debut.  It doesn't matter that my heart tells a different story about how they had numerous peaks and valleys and have experimented with a lot of ideas (not all of which hit bullseye) since day one; they went up and then went down.  Case closed.

In charges One Man Army, which opens with one of the best intro/full song combos they've had since "Ad Victoriam/Blood is the Price of Glory" in "March of War/Axe of Judgment".  I'm not kidding when I say that I was utterly floored by the intensity on display during the opening number.  The band hasn't sounded this hungry since 2007, and man is that a welcome change from the bland trot of Unsung Heroes.  This has been earning some comparisons to the debut album, and at least on "Axe of Judgment", it's absolutely fitting.  The insanely fast tremolo riffing with the soft, heroic choirs over the top, interspersed with jaunty jangling melodies and clear singalong moments can only bring to mind classics like "Windrider" or "Hero in a Dream".  Then the bridge devolves into an uncharacteristically heaving chugging riff, with banging toms and clear fist pumping "HEY!" moments before another crowd rousing gallop and soaring harmonized guitar solo.  This is just not the kind of thing you were ever gonna hear on the last album, and it was the absolute perfect song to open this album with.  It makes a definitive statement right out of the gate that they heard the complaints about Unsung Heroes, and they aimed to correct it.

There's.... well there's a slight problem with that.  It does assuage the sting of the last disappointment by loading this album down with more aggressive, epic, and most importantly, focused songs, but it sort of did exactly what I didn't like about the debut.  Yeah, it's back to being pretty much half fast songs and half slow songs.  Now, this isn't all bad, because some of the slower/mid paced tracks are pretty good, "Heathen Horde" brings to mind the fabulous "Wanderer" and "Warrior Without a War" conveys some great atmosphere, but fuck just drop the Heathen Throne saga already.  It doesn't work, it took up the only boring segments of From Afar and managed to be an agonizingly long 17 minute track on Unsung Heroes.  I don't think I can chalk it up to coincidence anymore that every single track labeled with that subtitle ends up being a pointless listen.  Across the six tracks that's comprised it so far (I don't care what anybody says, "Tumman Virran Taa" is part of it), we're at a staggering 55 minutes of cruddy music from the band.  Just... why?  So yes, as I'm sure you could guess, "My Ancestor's Blood" and "Descendants, Defiance, Domination" aren't particularly good.  They're actually fairly inoffensive when taken at face value (and to be fair, "My Ancestor's Blood" has potential to be one of their good mid paced tracks, but it just falls flat and ends up doing nothing worthwhile), just being boring songs that trot along at mid pace with bland melodies that don't elicit any particularly strong emotions.  But for some reason they irritate me probably more than they should.  Maybe it's just because fuck Heathen Throne stop it seriously.

Okay, so that's like sixteen minutes of the album that I definitively would rather not listen to, does the rest fare better?  Yes of course.  Like I said, this brings to mind the first album, so the dichotomy between songs is really clear and the gap is pretty wide, with "Cry for the Earth Bounds" being a sort of okay but kinda lame mid paced drowse-fest, but the title track and "Two of Spades" just completely slay.  I was pretty vocal early on about how the title track was lame, but within the context of the full album it actually works marvelously.  It's a quick, high octane barnburner with a massive pre-chorus.  The actual chorus lets the buildup down slightly but the massive choirs end up being the part that sticks in your head so it's not so bad.

"Two of Spades" has been getting a lot of hype during the album's promotional run, and let me tell you, it's completely deserved.  I'm not kidding when I say this may have finally usurped "Battle Song", "Guardians of Fate", or "Victory Song" as my favorite Ensiferum track.  It opens first with a very adrenaline pumping intro reminiscent of "Twilight Tavern", and from there it just picks up speed and the melodies only get stronger.  This is what they're best at, they can intertwine this strong metallic intensity of trad and power metal and throw these unabashedly dorky folk melodies over it and make it completely fucking work.  It all feels like it was born this way, like the two main elements of their sound were borne from the same embryo.  They developed together before being brought into this world together, and it shows.  Now apart from having one of the best choruses the band has ever had, there is one other aspect of this song that's been getting press, and let me tell you how utterly fucknuts wrong people are about it.  I've read a lot of press reviews long before release say that it utilizes "western" folk elements and constantly compare it to "Stone Cold Metal" from two albums ago.  Okay, so it's not something they haven't done before, right?  They already had the banjos, tin whistles, and saloon piano breakdown in that song, they can't really surprise me.  Yeah that's where everybody drops the ball like Jackie Smith.  The band does indeed break down into something they haven't done before, but that thing is a Dschinghis Khan song.  I'm not even kidding, this is straight up dorky late 70s disco music, complete with the "HOO!  HAH!" shouts leading into the verse section.  It's perfect, I can't imagine anything else this stupid being this incredible.  I can only imagine the band, with their signature look of wearing nothing but Finnish flags lining up in a choreographed dance sequence with gigantic grins on their face, punching the air in rhythm and kicking their feet out with glee before Markus takes a step forward and says his one line while the backing dancers yell out their response immediately afterwards.  I'll never get over it, something this dumb should be shunned for the forced randomness but it's just too perfect.  The entire album, to me, hinges on how fucking great the metal parts and how unexpectedly fun the silly parts of "Two of Spades" are.

So yeah, the opening rant was basically just to illustrate that Ensiferum managed to overcome their worrying slide into worthless crap, and while they've emulated their least-good classic album with the self titled debut, the same thing holds true here as it did there; the good songs are so fucking good that the boring shit of the bad songs really doesn't stick with you too much.  "Axe of Judgment" and "Two of Spades" are two of the best songs they've written in eight years, and there are a couple other great tracks scattered throughout.  The only real issue is the inconsistency that plagued their earliest work.  Markus and Jari have shown that they have the exact same problem with songwriting, since they've both been struggling with slow, epic songs and completely nailing fast and melodic ones ever since they parted ways.  So with that in mind, the album starts with a four track streak of fun, goes on a slight dip, picks up again with the flawless "Two of Spades" and frankly only half-good "My Ancestor's Blood" before being skippable at the end.  This isn't the godsend that we were all hoping for after Unsung Heroes, but it's a good pick-me-up and shows that the band does indeed care about pleasing the fans a bit.  They still have some fire left in them, and now lets just hope they can focus it for the next album.