Tuomas Holopainen - The Life and Times of Scrooge 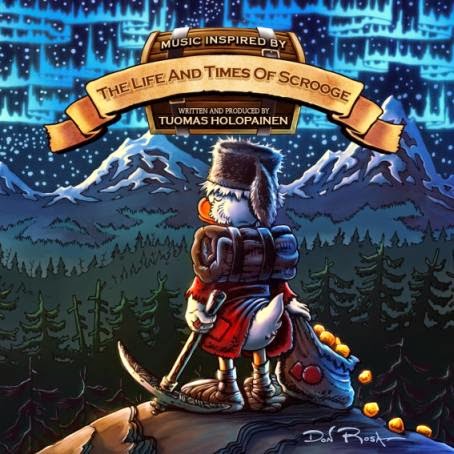 No seriously, this is like, a Simpsons joke come to life, right?  This is shit you'd find in the Achewood Underground.  There exists, in this universe that you and I both occupy, an album, brought to you by the creepy dude from Nightwish who keeps whacking off to Disney movies and kicking pretty cougars out of his band when they won't blow him, an hour long symphonic album based off of motherfucking Scrooge McDuck.  Like... did the guyliner seep into Tuomas's bloodstream and poison him enough to make him completely shit-tits bonkers but not enough to mercifully kill him?  I mean, I just keep stuttering and using far too many commas and run on sentences here because my brain is just still struggling to process the colorful disaster in front of me and I just what.

But do you want to know what the worst part is?  The absolutely, indisputably, irreversably worst part about Music Inspired by the Life and Times of Scrooge McDuck; Written and Produced by This Really Fucking Unnecessarily Long Title?  This is going to sound crazy, but you know exactly the kind of over-the-top cornball nonsense you imagine when you hear that the MILF Hunter from Nightwish was making an album about the fucking grouchy old codger from Duck Tales?  Yeah, this album has none of that.  I mean come on, are you fucking serious?  With a premise so goddamn ridiculous as Scrooge McDuck and his epic adventures before Donald had to join the navy and leave those three shitty kids in the care of the neglectful dickhead and produce the defining ohrwurm of late 80s/early 90s children, this should be much more stupid.  I know, I can't believe BH is knocking an album for not being as dumb as he expected, but really, this album doesn't even have the balls to be as utterly fucknuts wrong as the premise leads you to believe.

Maybe I just had my mind so set on hating and berating this from the instant I heard about it that the fact that it's actually decent is just pissing me off and my brain is just twisting logic to fit my prejudice?  I wouldn't say so, considering it's bad in just an entirely different way.  Yeah, I fully expected this to be an overly bombastic chili con queso, but instead it's just a goddamn snoozefest.  This is essentially the sound of Nightwish with all of the traditional rock elements removed.  You expected this to sound like the poppy shipwreck of post-Wishmaster stuff?  Not today, homeboy.  You get none of those stupid singalong moments, nor any of the kitchen-sink ballyhoo that you'd expect when Tuomas would get full control of a project.  No, this is just relaxed, symphonic lullaby music through and through.  It's lame as fuck because the mood just never changes.  "Glasgow 1877" starts off with a dreamy, sweeping epicism that brings visions of a magic carpet ride over Agrabah, and then for the next hour you're treated to that exact same theme.  It's just so goddamn dull, who the hell thought an orchestral album with absolutely no progression would be a worthwhile endeavor?  It's why metal songs need bridges, hooks, solos, fucking anything to keep it from sticking to one riff throughout the entire album, otherwise you'll end up with Six Feet Under.

And yeah, pointing out specific tracks for anything is kinda pointless since this whole thing is just one uninteresting blur of calm strings and pleasant piano.  I'm not gonna knock this for not being particularly daring or adventurous in of itself (I mean you should have know that Tuomas wasn't going to break any barriers here), but when the theme, as retarded as it is, is based on the adventures of a specific character, I shouldn't feel like I'm taking a dull sightseeing tour instead of embarking on journeys to ancient lands with the guy.  I guess it's nice lullaby music, but the whole experience is so static and bland that it just ends up being a waste of time to listen to.

On one hand, I know I'm probably being unfair for expecting this album to be something it isn't, and Tuomas clearly put his heart into this, but on the other hand it's just so fucking aggravating and uneventful that I still feel justified in hating it.  Nothing ever seems to move anywhere, each track begins and ends on the same note and everything in between is completely inconsequential.  This is an album full of nothing, just bursting at the seams with dead air.  Nothing on it sounds bad, all the instruments sound just fine and are arranged in ways that aren't confusing or anything, the female vocals are gorgeous and soothing and the male vocals are... well kinda shitty, but that's really the only technical aspect I can say sucks.  Everything else is just... there.  It's ten ballads in a row with no sense of adventure or loss or excitement or sorrow or anything.  It's a completely emotionless hollow of nothing.  And believe me, even if you hate Nightwish, at least something happens with that band.  It might be terrible, but it elicits some sort of emotional response out of you.  I can't see anybody even vehemently hating this, and the only reason it's getting a really low score has more to do with the absence of anything good as opposed to the abundance of anything bad.

There's no real ending to this review.  I could say it's symbolic because there's no real end to the album, since it just kinda putters out as weakly as it starts, but really I can just chalk this one up to laziness and a lack of anything worthwhile to say.  I wrote this purely because I thought my title was funny, fuck you.

Email ThisBlogThis!Share to TwitterShare to FacebookShare to Pinterest
Labels: Symphonic