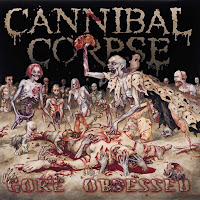 Okay, I'm definitely known to accentuate the negative, and there's no denying that I have a ton of fun tearing a bad album to shreds and that I love stirring up controversy and get an erection so hard that I could feasibly concuss a kitten with it whenever people talk about me or my writing.  It's just kind of what I'm good at, and I always criticize bands for not playing to their strengths, so what kind of hypocrite would I be if I didn't do the same thing?  But with that said, I personally feel I'm at my best when I'm being very positive (my personal favorites of my own are almost universally positive reviews), and so today I'm going to indulge everybody by putting an album up on a pedestal while berating everybody on the way up.  Yeah that's right, it's finally time for me to tackle Cannibal Corpse (just pretend I never reviewed Evisceration Plague four years ago).

I know it's odd to claim that what I'm damn sure is the most commercially successful and perpetually relevant death metal band of all time is underrated, but man you'd be amazed.  The metal underground seems to have this strange aversion to Cannibal at times, particularly the Corpsegrinder era (with a notable universal exception with Bloodthirst).

But BH, it all sounds the same!  They've been releasing the same album for twenty years now!  They were only good with Chris Barnes!

I'll never understand this fascination with deifying the Barnes era of the band.  Yeah, he was a much better lyricist than Alex and Paul (the two who have mostly taken over those duties since his departure), but as a vocalist he only managed to get through about an album and a half of the deep growl before just turning into this side-splittingly comical grumble on The Bleeding.  If nothing else, Corpsegrinder has managed to stay just as vicious and vitriolic as he always has been, even dating back to his time in Monstrosity.  And Gore Obsessed is no exception.  I love everything about Corpsegrinder, I love how he resembles a thumb, I love how he's one of the most recognizable faces of the band despite writing almost nothing since joining 18 years ago, I love how he sings as fast as a death metal version of Sean Killian, I love how his high vocals sound like a hardcore vocalist fucking a garbage disposal, I just love all of it.  He's pretty much the archetypical death metal frontman, and his vocal ability leaves nothing to be desired.  He gives it all in the studio and Gore Obsessed showcases his ability just as well as any other album, possibly even better than most.  In fact yeah, screw it, this album has the best vocal performance the band has ever given.  Seriously, the lows are more hellish than usual and the highs are more vicious than usual, Fisher really went above and beyond for this one, and while he has been incredible before and since, this one is pretty much the apex of his ability.

But of course, George is just one cog in the machine that is Cannibal, and the rest of the band is definitely at the top of their game here.  A wise man once posited this (and was largely ignored, like most geniuses in their time (though he wound up actually being a freakin' lunatic, so it's a wash)), but Cannibal Corpse really is the last bastion of that pure death metal sound from the early 90s.  After it had finally waded away from that primordial splooge of just being extraordinarily heavy thrash metal, around the time the guttural vocals became the norm and the blastbeat became less of a flair and more of a base; when song structures got more complex and melodies became darker and more twisted or just thrown out altogether in the name of atonal madness.  This is the exact moment that Cannibal has been relishing in since 1991.  Really, slap an old school production job on Torture and that release date could be 1993 and nobody would bat an eyelash.  They've never felt the need to drastically reinvent themselves, and they have been completely correct to not do such a thing.  They've struck gold in staying constantly relevant by helping to shape a seminal style of extreme metal and then waving that flag everywhere they go.  There's no need for them to take the Deicide route and start adding in neoclassical solos ala Necrophagist, or take heaps of influence from Devourment or something and just get super brutal and crushing.  No, they know what they're good at and they continually keep it fresh by simply just being incredibly talented songwriters.  That's not to say they haven't evolved, because any fan can tell that they clearly have.  With each new album, the compositions get slightly more developed, more well thought out, just a bit speedier, tighter, and more complex.  But even so, they keep themselves grounded in that style they helped found, and that alone makes them more interesting than the legions of DDR bands who just continually do the whole "Like Incantation, but... uh, Incantationier" thing a million times over.

All of that comes into play here on Gore Obsessed.  It'd be misleading to say "you know what this sounds like already", because that implies that Cannibal hasn't had a new idea in ages, but on the other hand, all the elements they've always employed are here in full force.  Paul's incredibly tight drumming with a deafeningly powerful sound pervades like always, and his performances are a huge part of the band's sound.  Really, his blasts may not be as impressively fast as somebody like Mauro Mercurio or any ridiculous tech death band, but they are almost infinitely more powerful.  And even so, he's still a very good death metal drummer and never feels like he's in over his head.  The accusations of him being the Lars Ulrich of death metal and complaints about him being too slow will always baffle me.  Not only are they demonstrably false (check "Pit of Zombies", "Drowning in Viscera", "Dormant Bodies Bursting", et cetera), but by that logic, Mike Smith, Steve Asheim, and Pete Sandoval are also terrible drummers because they don't play as fast as the dudes from Brain Drill or Decrepit Birth.  Pull your heads out of your asses, kids, Paul Mazurkiewicz is a damn fine drummer, and anybody else behind the kit would simply change the entire dynamic of the band.  His groove heavy style is just as important as Asheim's relentless blasting in Deicide.

On one hand, I feel like there aren't as many standout riffs here as there are on some other releases (especially ones that would come later, like "Purification by Fire" from Kill or "Demented Aggression" from Torture), but on the other hand, the cliche holds true where Gore Obsessed makes up for the relative lack of standout moments by just having potentially the tightest and most consistent collection of tracks the band has ever put together.  In a way, this is kind of a "back to basics" album, since little flourishes like Webster's ridiculous bass runs are all but absent here apart from the closing track, but the songwriting continued its upward progression around this time, so what we have are a collection of songs that are marginally thrashier than what they'd done for the decade prior, but still managed to get tighter and more complex in the process.  Really, something like "Pit of Zombies" or "Compelled to Lacerate" showcases this brilliantly.  It's simpler than the blisteringly complex Bloodthirst that preceeded it, but I almost feel that it's a better representation of what Cannibal stands for.  And even with that said, there are still neat little quirks like that backmasked intro to "Sanded Faceless" or the impressively lengthy screams in "Mutilation of the Cadaver" and "Hung and Bled".  Their trademark slow song this time around ("When Death Replaces Life"), is also potentially the best the band has ever released, even above classics like "Death Walking Terror" and "Festering in the Crypt".  And unlike those, it even builds to an exhilarating climax, and the whole song just gets faster and faster as it goes on.  Even the Metallica cover is incredibly fun.  They really just did everything with this album, and all of it hits bullseye.

Gore Obsessed may not be the apex of their career, but it's pretty goddamn close, and it's potentially my personal favorite from the band.  It's in the top three at the very least.  It may not have something as instantly recognizable like "Make a Sandwich", "Fucked with a Knife", "Hammer Smashed Face", "Skull Full of Maggots", "Death Walking Terror", "Pounded into Dust", or "Stripped, Raped, and Strangled", but the overall quality is freakin' astronomical, and if you can't lose your mind to "Savage Butchery", "Hatchet to the Head", or "Grotesque" at the very least, then I don't know what to say to you.  "Grotesque" is seriously a top ten all time song for the band, and it needs more love, most definitely.  That chugging part at the end of the verses when Corpsegrinder is just hollering TURTLEKILL TURTLEKILL over and over again?  Sublime!  This is easily one of Cannibal's best, and I'd genuinely recommend it as a starting point when looking to get into the Corpsegrinder era of the band.